No long drawn out explanation of the metaphorical meaning of “Bridge Over Troubled Waters” or anything like that (even though soul can’t be sang better). I simply like bridges. Perspective complete.

Since we’re on the topic, I will in fact, tell you about how I realized this new found architectural admiration.

Every Monday through Friday morning, I drive to work via Martin Luther King Drive in Atlanta. I’m one of those people that you do not want to get stuck behind on your morning commute. That morning stretch is sometimes the only peace and quiet I will get all day, so I enjoy it; neglecting the expressways if possible, and always looking for something to grasp my attention and curve my perspective.

Since I take pleasure in pretty much every morning’s travels, I have not established markers for “distance-to-go”. You know the checkpoints that you have to signify you’re halfway there? Yeah, I don’t have those for my Monday through Friday mornings. I do have though, two views that I wait to see every day. Last week, I noticed that both of those views were centered around old bridges that to me, seems to fit in multiple decades, locations and serve multiple purposes. They give an awakening definition to the little area that they are set in, that would have otherwise simply been more pavement and open air.

It was not until last week upon this realization, that I gathered as many mental references as I could to see if I liked bridges or just those two views in particular. As I wrote out my bridge list, I started to see that I had actually developed a subliminal obsession with the structures.

The earliest reference to bridges that I can remember could be one of the two; The Great Mouse Detective or Three Billy Goats Gruff. The Great Mouse Detective was a children’s mystery movie that was rereleased in 1992. I watched had on VHS, so it was probably 1993 when I saw it. I was six or seven years old. The movie took place in London where the climax was set in the Big Ben clock tower overlooking the Westminster Bridge. Now imagine watching this movie at least once a week with the most exciting part including The London Bridge in the background… The imagery is bound to stick with you.

The second and more seasonable explanation, Three Billy Goats Gruff, was my favorite book for a long time. I remember it being especially my favorite once my mother gave birth to her third son, also known as the First Billy Goat. That made me the Third and biggest Billy Goat to defeat the Troll that lived under the bridge. After reading this book over and over again, my brother, the Second Billy Goat and I, would always look for the Troll while traveling under a bridge. Thank God we never saw anything that resembled a troll back then. I’d probably be terrified of bridges… and interstate 85.

In grade school, I remember doing a project to prove the strength of a triangle. With popsicle sticks (the staple of any grade-school project) I constructed a very elementary style bridge that supported the weight of toys that should have been too heavy for popsicle sticks. Maybe this is when it started. From the bridge list, this was the only instance where I had hands-on experience with building one, but I have not thought about that bridge since I crossed it. 🙂

There is something about a bridge that provides a level of romance that no other setting can. Not just any bridge though. It has to be the old-fashioned cobblestone bridge set over a quiet brook in the middle of Autumn; just cool enough out for a sweater. Is it cliché? Yes. However, I remember a painting that I saw in a textbook, of a woman with a parasol crossing a cobblestone bridge. Since I have a soft spot for scenic art and poetry, the image stuck. Despite nearly an hour of searching Google for it, I am starting to believe that I might have blended multiple art pieces to compose one image. Nonetheless, I still hold that image as the crest of visual romanticism. I am annoyed that I cannot find that image, but I implore you to do a Google Image Search of: Cobblestone Bridge Painting. They may not be what I was looking for, but they still project the feeling of love that I have attached to the image in my head.

Detached from the idea of this image of romanticism, the most memorable date I have been on, was spent not on a bridge, but a small pier. I consider a pier to be half of a bridge, or a dead-end bridge. As I think about the surroundings of that outing, I have to question whether or not it is the presence of water that I adore instead of the bridge itself. I hate water though. I can’t swim and hate being wet. Therefore, back to the original statement; I love bridges.

I would have just ended with that, but oh well… I’ll make it short.

The literal definition of a bridge is a structure carrying a pathway or roadway over a depression or obstacle.

Metaphorically, it’s the means you have to take to get from one point in life to another. How long it takes you to get to the bridge, to cross it, and forget it is all up to you. Often we find comfort where we are and stay there until circumstances start to push us to a point where we can no longer be comfortable. It should not be that way though. Complacency is a killer, and when life pushes just a little harder than you can stand, you could easily find yourself stumbling across “bridges” hoping that each step finds a sturdy landing. If prepared, with the proper support cast (God is enough; everyone else helps though), you can come to places of hardship in life and walk across the scariest bridges successfully. Whatever you may be running from or trying to escape or break free from, will force you off an edge or to cross the bridge ill-prepared. So you may as well pay no mind to what’s behind you and focus on each step towards a future of greener pastures; Trolls will be taken care of by your support cast. No need to worry. 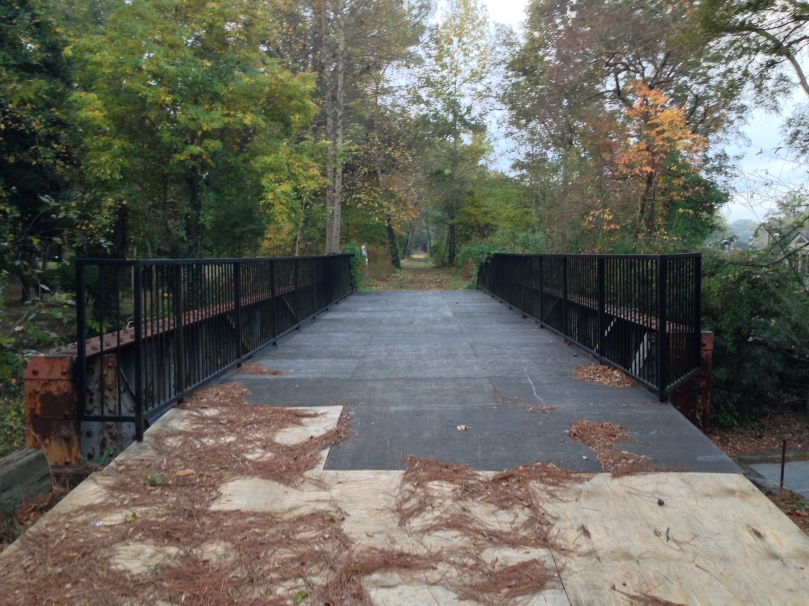 In the meantime, I’ll continue enjoying my rides to work while I continue to grasp this new-found interest. I may build one as a project. Who knows?